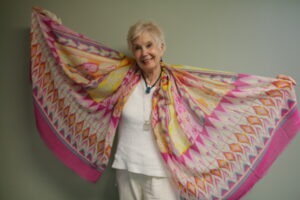 My lineage is one of healers. Although I was psychic and had visions as a young child and young woman, my secret dream was to be a transmitter of healing energy. In order for dreams to materialize, we are expected to be responsible and take action. No one else can create our passion for us. Being a healthy woman with all that a normal soul would desire in life, I remained unsatisfied. I willingly declined a Universal Motion Pictures Studios contract as a young mother and other glamorous opportunities that continually presented themselves. Deep down, I knew there was something else I was to focus on but did not have a clue. Country club living, traveling, a large number of good friends and the best of all, a good, loving and beautiful family were not enough. Something was lacking. I was outwardly living the normal human dream and I felt incomplete.

At the time, I did not understand the immensity of the inner landscape, the soul and light within. The real part of who I was continued to play hide and seek veiled by human flesh and the conditioning accumulated from birth. All I knew is that I seemingly had everything but there was much more to consciously remember, prepare and experience before I could feel fully alive. When we have a strong inner drive for something, regardless of what it is, the universe eventually will provide an opening. When the opening appears, it is our choice whether we walk through the door and actually embrace the opportunity.

What happened to dramatically change my life and manifest my dream? It began with two choices. I chose to have minor surgery on my lower abdomen. About five days after returning home, I noticed the surgical area was swollen and red streaks were rapidly appearing. A high fever quickly developed and the pain increased. I had just given my newborn son his 10am bottle. I decided to lie down in the bed next to him because the pain and the infection became worse. The sensible action was to call 911. My second choice was in not calling an ambulance. I placed my hands on top of the infected bare skin and immediately fell unconscious. I knew the time because of the feeding schedule. One hour later I awakened to a sticky substance spreading underneath my hands. To my amazement, an angelic force, a higher power, had created two openings, one on each end of the six-inch length stitches. When I inspected the area, I was shocked to discover that the infection was draining without any human assistance. The red streaks, pain, swelling and fever had completely disappeared. I had chosen to surrender my physical life to a Higher Power and the result was an instant healing.

Being unconscious and alone for one hour was the first step in a journey that has been non-stop until this day. What I did not know at that moment was the secret passion to be a healer of bodies and souls combined with an intense faith in God would create a situation that would catapult me into a miraculous and very eventful spiritual life. From that day forward, I was a very different person.

As a direct result of my own physical healing, I quickly discovered that prayer and laying on of hands, a healing would occur in others. Many were healed of cataracts, ongoing spinal problems, cancer, carpal tunnel, multiple scoliosis, tumors, earthbound spirits and much more.

After the dramatic healing, I began to recall the ancient wisdom teachings; the Universal laws of spiritual living that awaken inner knowledge and heal the soul. Spending long hours in silent meditation, the teachings appeared in visions of Light projected on a bare wall in my room, radiant sentences hanging in front of me in mid air or messages whispered in my listening ear. With ease, I began to write inspirational messages.

I continue to witness God’s radiant light and angelic beings. My life has been dramatically saved four times by angels. Today, my dream of offering authentic service continues to manifest in magnificent ways. As a result of the original one-hour transformation, I felt alive, fearless and full of hope. Some people refer to this type of magic as a second birth. It is.

I understand suffering as a severe spiritual identity problem that we create as a result of false beliefs held in consciousness. To heal a spiritual identity loss, there is an urgent need to understand cause and effect. To survive, we must rediscover what we really are and the purpose of life. I call the step-by-step understanding of the intimacy of this sacred relationship as falling in love with the Divine.

Some people assume that once we are on the path of Light that life will automatically be easy. Although I am constantly given unseen and seen assistance, it is not easy. Because I had changed dramatically within, the without did likewise. Through the pain, I developed a stronger sense of discernment, patience, compassion, and power.

My seven published books are based on firsthand experience, the true teacher. Everyone has a story to tell. The individual story cannot be separated from the collective story. We are all One. Eventually, all souls will awaken and lift themselves beyond the “closed structure” of the physical world. To evolve, changes are required. Some of the changes may be uncomfortable. We can through love, wisdom, and science regenerate ourselves and joyfully transform the physical into the holy and infuse the holy into the mundane. Conscious thinking and action are required.

The magic of dreams is in the heart of the soul. The human experience is a means for the inner Self to express in matter. Be true to your dream. Our evolution is the greatest love story ever written. Why prolong the journey?

In love and gratitude,