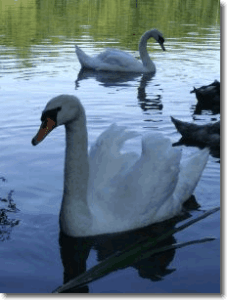 One summer, two English Mute Swans, a male and female, became an emotional part of my life when they were left abandoned on the river behind my home. Every day for five months, regardless of weather conditions, we would meet and mentally commune with each other. In late November, the river had begun to freeze. With deep concern, I noticed that they did not move from off of a large slab of ice. It was obvious that something was wrong and food was not available. After persistent phone calls, the police and representatives from animal control came to the river but did not agree that a problem existed. They kept insisting that swans like cold weather and if they were hungry could fly.

I knew the swan’s daily habits because of our close association and felt strongly that their wings were clipped. After many more telephone calls, I was able to contact a wonderful man whose business included rescuing swans. Although many miles distance from the river, he came the very next morning. The two weak and starving beauties were saved and transported to his swan sanctuary in a large van. The first question that I asked once they were safely in the van was the condition of their wings. Yes, they were clipped and the beauties would have starved to death if action had not been taken. I still keep in touch with the ‘swan’ man. Since the dramatic rescue, my darlings have given birth twice. I consider myself a swan grandmother.

Historically, there have been swan cults in England and Siberia, swan feasts, swan-feather mantles, swan-kings, swan-knights, swan-lineage, swan-maidens, swan-shamanism, swan-Upping in Britain on the River Thames and legends of the Sky Bird seen in the stars of Cygnus on the Euphrates River of Upper and Lower Iraq as a celestial bird.

Throughout Indo-European myths swan maidens are mentioned. The Vedic Brahma had the swan as his special vehicle. Of course, there is the myth of Zeus in swan form impregnating Leda who then gave birth to the Heavenly Twins, twilight and dawn, and Helen, another name for Selene, the Moon. Both male and female swan spirits appeared in folktales derived from pagan mythology. They link the different worlds and dimensions. The English Mute Swans, the pair I love, also epitomize the idea of strength through silence.

In the popular book, “Animal Speak”, the author, Ted Andrews, offers extensive research on the symbolism of swans. As a totem, they represent the awakening of the true beauty and power of the Self. The swan is one of the most powerful and ancient of totems. They are a solar symbol and serve as a bridge to new realms and powers. The swan has ties to the direction of the North. They symbolize the power and longevity that is possible as we awaken to the beauty and power within ourselves.

Swans have appeared to me in visions of Light and several physical experiences that border on the unbelievable. The swan is the totem of the child, the poet, the mystic and the dreamer according to Edwards. I am deeply moved by their energy and beauty and hopefully their poetic fancy will touch your heart as well.

For inquiries regarding Public Speaking, Workshops, and Private Consultations contact: